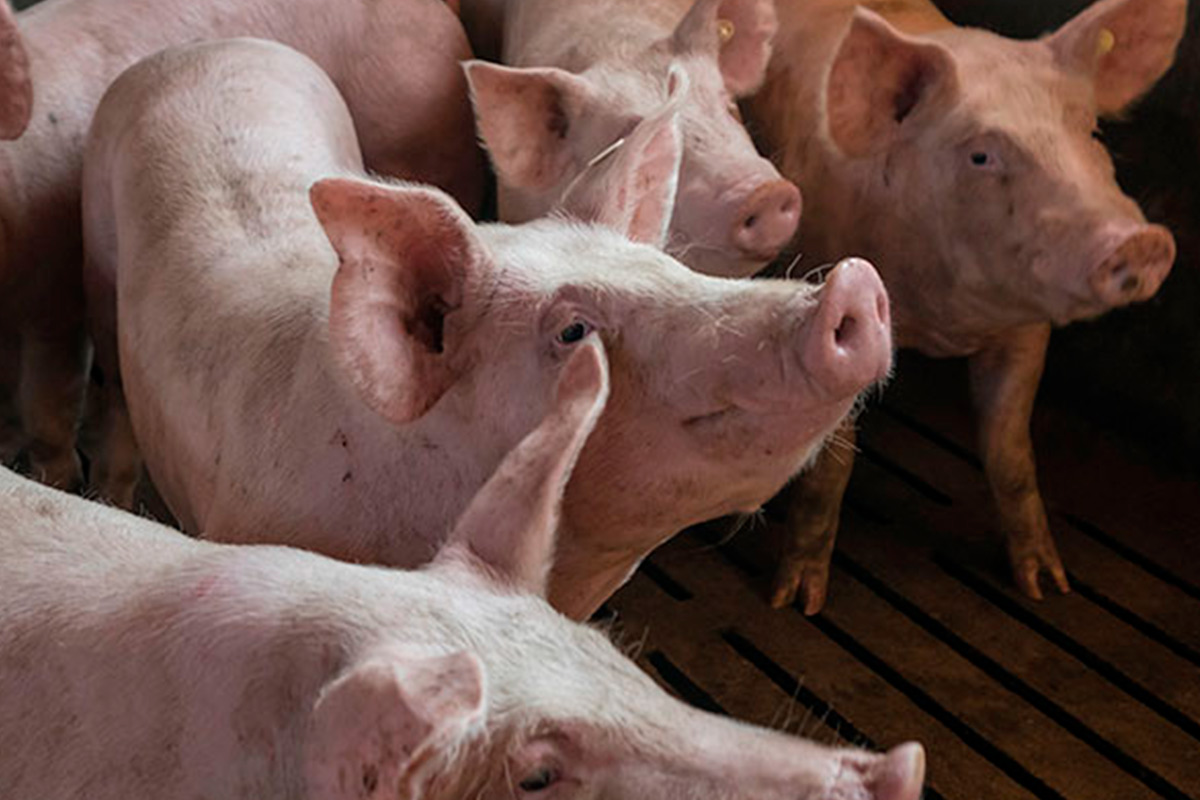 MHYOSPHERE® PCV ID is the first and only vaccine based on a recombinant Mycoplasama hyopneumoniae (M. hyo) strain, called Nexyhon. This strain expresses the capsid proteins of Porcine Circovirus Type 2 (PCV2) in its cytoplasm and acts as the only active substance as a whole once inactivated. Furthermore, it was the first vaccine registered in Europe with demonstrated protection against all three PCV2 genotypes (a, b and d).

This article reviews the different studies that have been conducted with the product to demonstrate its efficacy, both experimentally and in the field, and its beneficial effects on growth until the end of fattening period. 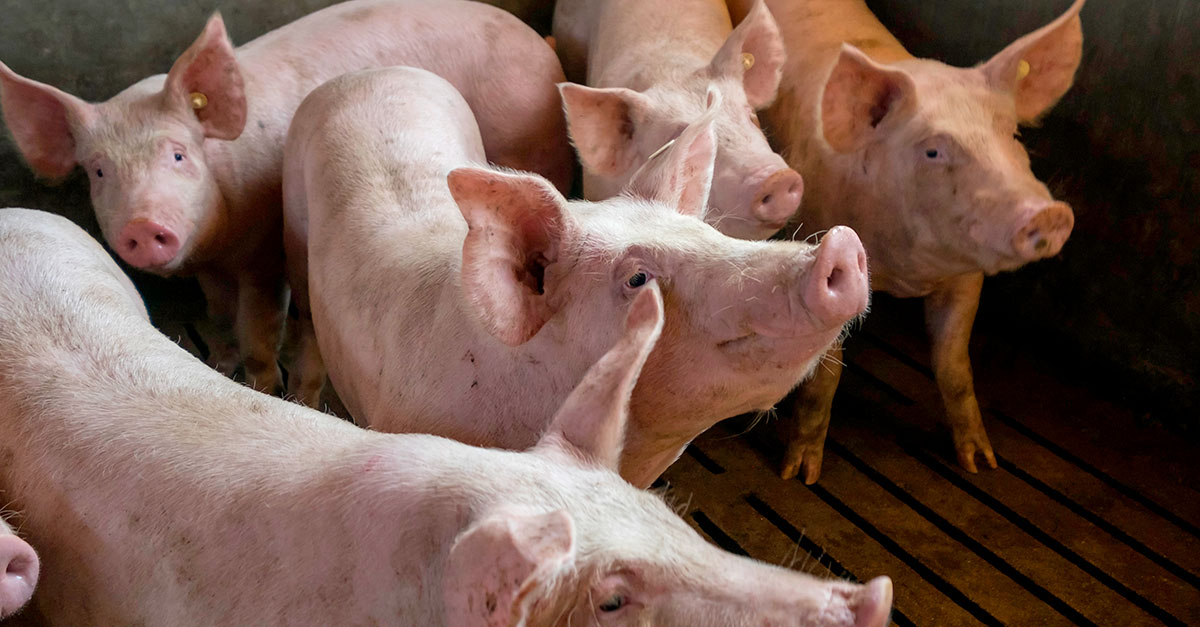 First, the efficacy of the vaccine was evaluated against both M. hyo and PCV2 under experimental conditions. To determine the duration of immunity for each pathogen (M. hyo and PCV2), two separate trials were performed1.

In each trial, three-week-old piglets were randomly divided into two groups (vaccinated and control) at the time of vaccination. A single 0.2 ml dose was administered intradermally to vaccinated pigs (MHYOSPHERE® PCV ID) and control pigs (PBS), using Hipradermic® 3.0.

Three weeks after the M. hyo challenge, the pigs were necropsied to assess lung lesions as an efficacy parameter.

After this challenge, blood samples were taken from the pigs on a weekly basis to determine viraemia by quantitative PCR (qPCR).

Four weeks after the challenge, all the pigs were necropsied and their mesenteric lymph nodes, tonsils, and lungs were taken for quantification of PCV2 by qPCR. 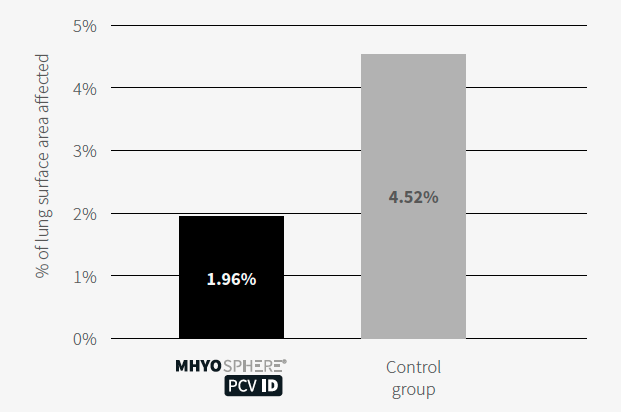 Regarding PCV2, there was no viraemia in the group vaccinated with MHYOSPHERE® PCV ID, as can be seen in Figure 2, and the mean PCV2 viral load was significantly lower (p <0.05, Mann–Whitney U test) in the tonsils, lungs, and mesenteric and inguinal lymph nodes. 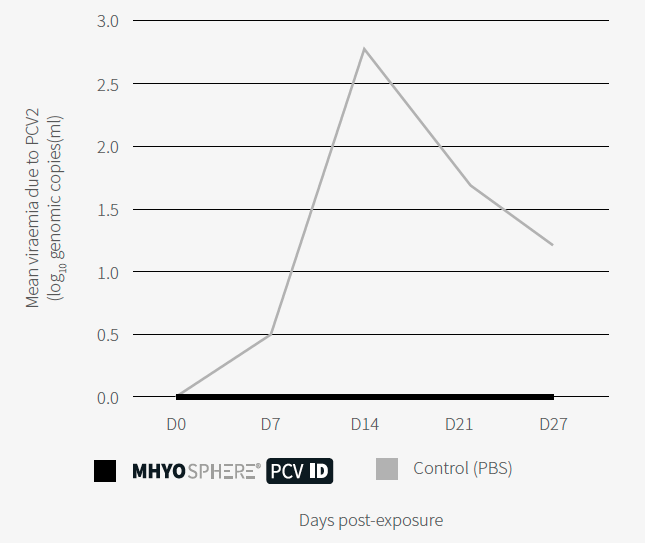 Once the efficacy of the vaccine had been tested and determined under experimental conditions, the second part of these tests, consisting of field tests, was done.

One group (n = 1,253) was vaccinated with MHYOSPHERE® PCV ID, while the other group (n = 1,254) received a placebo. A single 0.2 ml dose was administered intradermally to both groups using a needle-free device (Hipradermic® 3.0), and the animals were followed up until the end of the fattening period.

The main efficacy endpoints were M. hyo-like lung lesions at slaughter, evaluated in all animals, and the efficacy parameter used for PCV2 monitoring was viraemia, evaluated by qPCR (VetMAXTM PCV2 Quant Kit, Thermo) in 30 animals per group and farm, periodically sampled throughout the study. Genotyping of PCV2 from each farm was done by PCR.

Furthermore, the incidence of pigs with at least one M. hyo– like lung lesion was also significantly lower in the vaccinated group (p <0.01, X2 test) 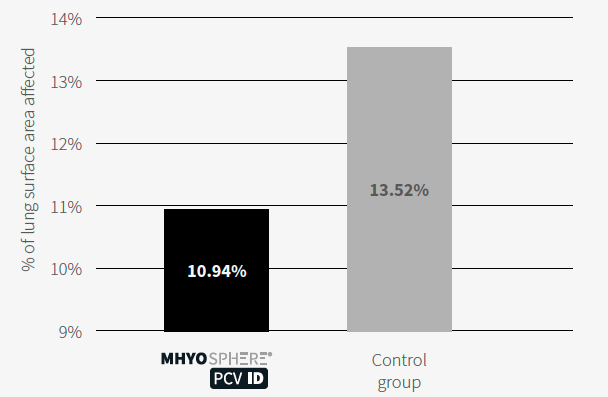 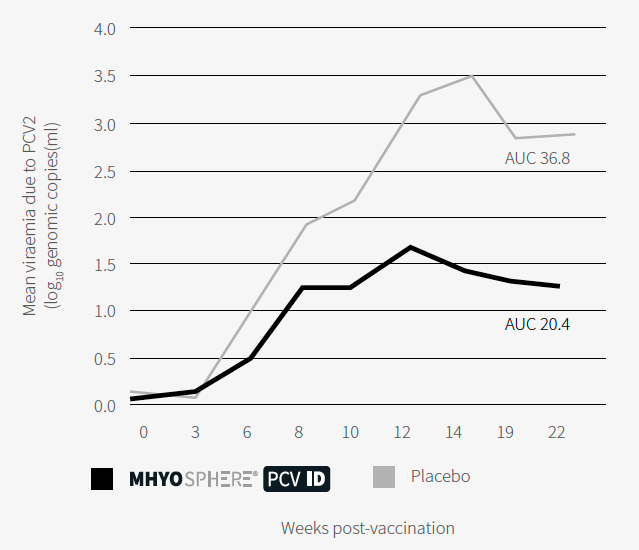 Figure 4. Viraemia due to PCV2. The area under the curve (AUC) was lower in the vaccinated group (p <0.001, mixed linear model).

Only one genotype was found circulating on each farm. In the remaining farm, there was low recirculation of PCV2, and the genotype of the virus could not be determined.

Regardless of the PCV2 genotype identified on each farm, the reduction in viraemia generated by the vaccine was seen to be significantly lower (p <0.001, linear mixed model) in the groups vaccinated with MHYOSPHERE® PCV ID compared to the control group. By genotype, the differences were:

Therefore, based on these results, it was possible to conclude that MHYOSPHERE® PCV ID confers protection against the three most prevalent PCV2 genotypes — a, b and d — as stated in its indications.

The nursery results also show the effect of the safety of the vaccine, as piglet yield was not compromised by general reactions, which can negatively impact the growth of these animals in this critical phase. 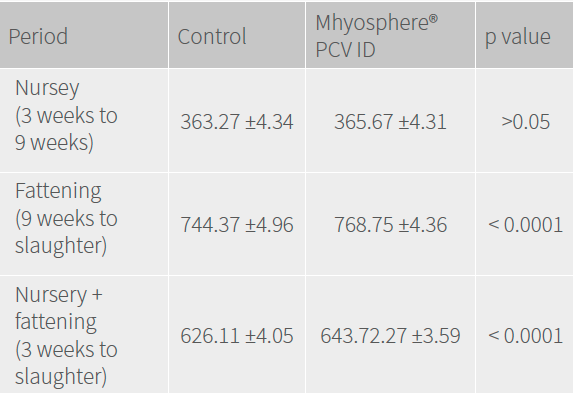 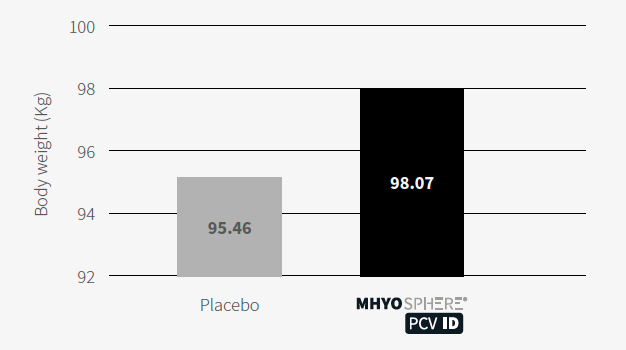 Figure 5. Mean body weight (± SEM) at the end of fattening

This website uses its own cookies and those of third parties to improve our services and navigation. By clicking on Accept you consent our use of all these cookies. You can also opt to change your settings. For more information, see our cookie policy. Read More

This website uses cookies to improve your experience while you navigate through the website. Out of these, the cookies that are categorized as necessary are stored on your browser as they are essential for the working of basic functionalities of the website. We also use third-party cookies that help us analyze and understand how you use this website. These cookies will be stored in your browser only with your consent. You also have the option to opt-out of these cookies. But opting out of some of these cookies may affect your browsing experience.
Necessary Always Enabled

Domain: mhyopcv2.com
Description: This cookie is set by GDPR Cookie Consent plugin. The cookies is used to store the user consent for the cookies in the category \'\'Necessary\'\'.
Duration: 1 years 19 days 15 hours 19 minutes
Type: Necessary

cookielawinfo-checkbox-non-necessary
Domain: mhyopcv2.com
Description: This cookie is set by GDPR Cookie Consent plugin. The cookies is used to store the user consent for the cookies in the category \'\'Non-necessary\'\'.
Duration: 1 years 19 days 15 hours 19 minutes
Type: Necessary

Any cookies that may not be particularly necessary for the website to function and is used specifically to collect user personal data via analytics, ads, other embedded contents are termed as non-necessary cookies. It is mandatory to procure user consent prior to running these cookies on your website.

_gid
Domain: mhyopcv2.com
Description: This cookie is installed by Google Analytics. The cookie is used to store information of how visitors use a website and helps in creating an analytics report of how the wbsite is doing. The data collected including the number visitors, the source where they have come from, and the pages viisted in an anonymous form.
Duration: 1 years 19 days 15 hours 21 minutes
Type: Analytics